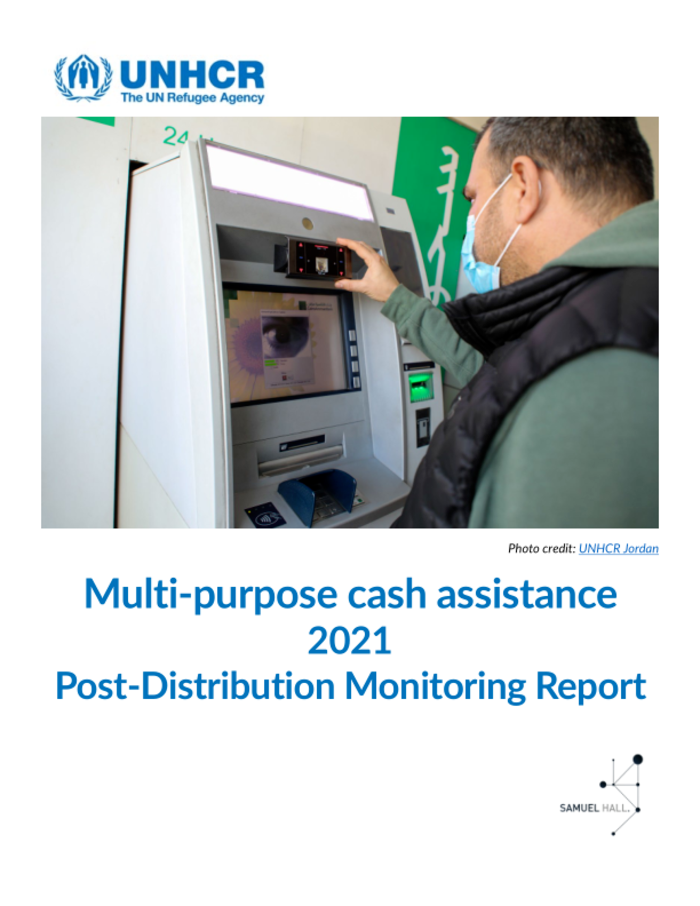 This report presents the results of the 2021 annual Post-Distribution Monitoring (PDM) exercise of UNHCR’s Urban Basic Needs Cash Assistance Program in Jordan. Through a banking network of automated teller machines (ATMs) equipped with iris-scanning technology, as well as, increasingly, mobile wallet technology, the agency pays out around $5.5 million per month to more than 33,000 vulnerable refugee families across the country.
The population of concern to UNHCR in Jordan consists mainly (90+%) of Syrian refugees, but the organization also assists approximately 3,000 refugee families from other countries such as Iraq, Sudan, Somalia and Yemen.1 Assistance is designed to enable refugees residing outside of urban camps throughout Jordan to meet their basic needs and reduce their vulnerability to protection risks.

The results of this tracking exercise suggest that, as expected and has been the case consistently over the past few years, a majority of respondents are using the cash to meet essential current household needs. These expenditures are mainly for rent and food and, to a lesser extent, for utilities, health care, debt repayment and transportation costs.
The percentage of respondents who spend their money on food has increased steadily since 2018. Different governorates show distinct cash spending patterns; Amman and Zarqa appear to be considerably more expensive environments. 14% of non-Syrian respondents and 7% of Syrian respondents surveyed for this exercise said they had used cash to reduce their debts. For all respondents, regardless of national origin, this figure was 10%. This change represents a 6% increase from 4% for all respondents in 2020. This year-over-year increase is perhaps indicative of the heightened challenges brought by 2020 and 2021.

Through regular post-distribution monitoring, UNHCR aims to monitor the extent to which recipients of basic needs cash transfers rely on negative coping strategies. We find that negative coping mechanisms remain pervasive, though many are at their lowest levels since the past four years. However, one encouraging feature of the 2021 data is the first example of a substantial drop in rCSI scores to 15.5 for non-Syrian refugees and 13.4 for Syrian refugees interviewed for this study. This is a promising development as it reverses the upward trend started at the end of 2019 by a significant margin. But vigilance must be maintained because the proportion of respondents who declared having carried out exploitative work increased exponentially, from less than 2% in 2020 to 15% (for Syrian respondents) and 11% (for non-Syrian respondents).

Another coping mechanism for many refugee households in Jordan is debt. The proportion of cash recipients interviewed for this study who have debt remains constant at around 89%, which may indicate continued difficulties in meeting household needs with available sources of income. While Syrian refugee households were more likely to have borrowed in the 30 days preceding the survey, their overall level of debt and associated worries were lower. Given the importance of debt as a coping mechanism for the population of concern to UNHCR, it is recommended that UNHCR continues to work towards financial inclusion and access to credit for its population under its jurisdiction.

The contributions of UNHCR’s basic needs cash assistance to the living conditions of urban refugees are clear.
Although cash does not seem to be a solution to all problems, apparently having no significant impact on access to livelihoods and on health, it is identified by almost all respondents as improving their quality life and reducing feelings of stress. Nevertheless, nine out of ten respondents continue to be concerned about the future of their household.

Feedback on service delivery is generally positive. 72% of Syrian respondents and 65% of non-Syrian respondents surveyed received aid on the day they expected it, with those who did not citing a lack of planning information or delays in delivering aid ‘silver. 12% of Syrians and 18% of non-Syrians, respectively, said they experienced poor service in banks. This is a marked improvement from mid-2020, when only 45% of respondents felt that CAB staff treated them with respect.

As was the case in previous years, recipients cited numerous iris scan attempts and out-of-service ATMs as the most common difficulty encountered when withdrawing assistance. Although biometric identification remains the most secure mechanism against fraud, this is not necessarily appreciated by a beneficiary population wanting the flexibility to appoint an alternate fundraiser when needed. Further communication about the benefits of iris authentication and the options available to those unable to withdraw cash in any given month would address a lack of awareness among recipients of money by scanning the iris.

Travel time to where the cash aid was spent appears to have recovered from last year’s high levels, with the majority of respondents being able to reach the place of expenditure in less than 15 minutes. Awareness of the UNHCR helpline and the services it provides remains universally known, with 70% of Syrian respondents and 78% of non-Syrian respondents using the helpline or help desk UNHCR. This is accompanied by a proportionally high level of satisfaction with the Organization’s response to their request.

UNHCR in Jordan remains at the forefront of innovation in cash distribution and its learning program is extensive. In 2022, it is recommended that the operation add a panel study component to the PDM exercise. This could take the form of family diaries collected for selected beneficiaries in person and/or via mobile apps presenting a range of detailed questions (e.g. on expenses) at regular intervals. In a context where durable solutions and local integration are relevant for a significant proportion of displaced people in Jordan, the cash transfer program would benefit from data-driven insights into the pathways by which the lives of cash transfer recipients evolve. in exile over time and could eventually allow them to prosper without financial aid.